The annual January onslaught of snow has caused its annual onslaught of chaos – schools closing, roads freezing and rail networks struggling to keep to timetable. GRR, SNOW. But whilst it’s all sometimes just a massive (if pretty) pain in the arse, other times it makes for *strike up the emotive soft-rock* good times and happy memories. As such, as I sit here wondering how I’m going to make it to work and back tomorrow without slipping over at least twice, here are my five nicest memories of snow days gone by.

White Easter
For the first half of 2008 I was still on my Gap Year; working for my dad’s company full-time and continuing to do various theatre-based antics on the side. That job was my first experience of working full-time, and thanks to my commitments with two local am-dram societies and the youth theatre club I was running, it the first of many times in my life that I felt like I never had any free time. EVER. So along came Easter, when work was temporarily off the table and all other commitments were put on a brief hiatus. As is the norm for my family at times of holiday, we went up to our little bungalow in Sheringham, Norfolk, and spent a few days there. And, whilst I’ve never yet seen a White Christmas, we did bizarrely get a White Easter. The coastline looked like a scene from The Day After Tomorrow and the vintage steam railway looked even more picturesque that it does normally. I have great memories of every holiday spent up there with the lunatics I call family, but having a snowball fight on Easter Sunday really is one of the best. 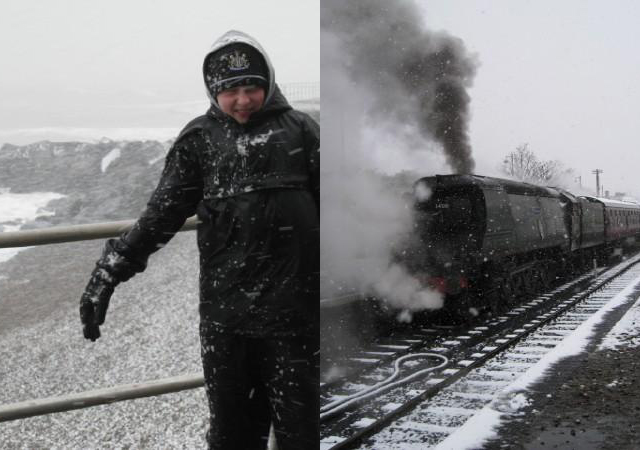 [Photos: L – My brother gets battered by the wind and snow by the beach; R – A train (obviously)]

Being The Saturdays in broad daylight
The first snowy spell that hit Norwich while I was there for university came days into the second semester of my first year. Everyone on my course was amazing, but the people in my closest circle of friends had clicked within about half an hour of meeing and, despite being told “YOU WON’T STILL BE FRIENDS IN A FEW MONTHS, IT WON’T LAST, WAAA WAAA WAAA” by wise gurus in older year-groups, we were still virtually joined at the hip a few months later. So naturally, when snow arrived just after our first Christmas break, some of us were out wondering through it in an instant. This was, oddly, a novelty for me. Whenever we had snow days at school I was either in a friendship group that valued computer games over natural light, or I was in a friendship group that just wanted me to bugger off. So this otherwise run-of-the-mill meander around the white campus – rolling down hills, chucking snowballs, bantering like we were the funniest people on Earth (WHICH WE WERE) – had a more than a little sentimental value to it. #sadbuttrue. We also recreated The Saturdays’ ‘Issues’ video, but I’m gutted that I can’t find it anywhere now. Some (me) say it was better than the original.

[Photo: My friends Natalie, Jamie and George walking around campus]

The guestlist-cutting weather of my 21st birthday
The upside of having a birthday 12 days before Christmas is that everyone is in the party mood. The downside is that the weather is often shit; and the latter really got on my tits when it came to my 21st birthday in 2009 (as in that was the year I turned 21, not as in I had 20 other birthdays in 2009). The ‘do’ was pencilled in for a Friday night but, unfortunately, bad weather had ravaged the country over the week and the roads were icy enough for people to fear death if they had to drive any more than a few miles. This unfortunately led to many people being unable to make it, but what it also meant was I was even more grateful for the people who DID make it – particularly Jamie, one of my bestestestbuds, who braved the 50-minute hike from her place in Essex to Party Central (…) in Baldock, reasoning that she would never have missed it for the world. AWWWW.

[Photo: Myself and the friends who made it to the ‘do’; none of us looking particularly amazing (no offense)]

Lakegate
As I mentioned earlier, holidays for the Kitcheners mean extended stints in Sheringham, and whilst it didn’t snow while we were in town for Christmas 2010, it had done a few days beforehand. This meant that there was a helluva lot of ice all over the place, including on a small lake that we often pass on one of our regular walks. The whole thing was completely frozen over, and in a worrying exchange of traditional roles, my parents were desperate for us to walk on it for a photo op and we kids (well, me and my sister, anyway) were putting safety first and refusing to go anywhere near it. As is the norm Chez Kitch, the parents’ word trumped ours, and soon we were skidding across the lake whilst Dad, from a never-gonna-save-us-if-we-drown distance of about 300 metres, took the photo. Any terror we felt up to that point was both justified and increased when suddenly a massive, dull cracking noise emerged from underneath us, sending me and my sister running (and squealing) for dry land, leaving my mum and brother keeled over in hysterics.

[Photo: Mum and Wiz choose standing and laughing over running for safety when the ice begins to thaw]

“REPORTING FOR DUTY”
In the third year of the UEA drama degree, the whole year group (minus the few who opt for a different module) comes together to produce a full-scale production. Ten weeks of rehearsing come to a head at the Get-In Weekend, at which the Drama Studio is completely re-designed and the set is finally built. Our Get-In Weekend happened to feature lots of snow, and I don’t know if it was that our just our light-hearted relationship with each-other, but we all seemed to be in unnaturally high spirits considering the pressure that was on us and the sheer amount we had to get done. I remember vividly walking to the studio with my housemates on the Saturday morning, wrapped up and crunching our way down a snow-coated road, preparing ourselves for the stress that lay ahead as only we knew how – by laughing about it. 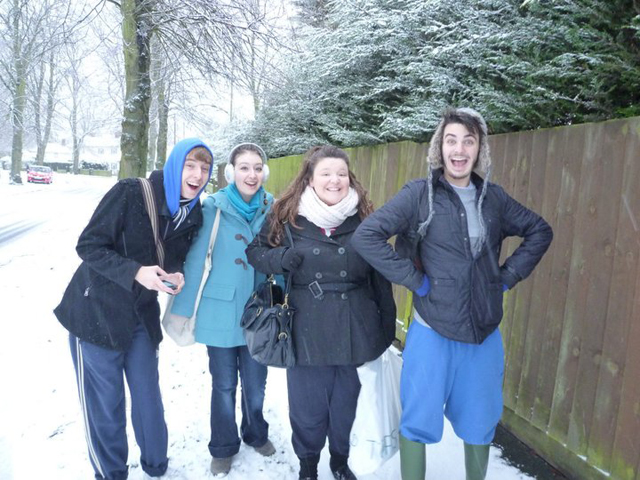 Finally, I don’t remember this one being taken (obviously) but this is a special snow-based photo: