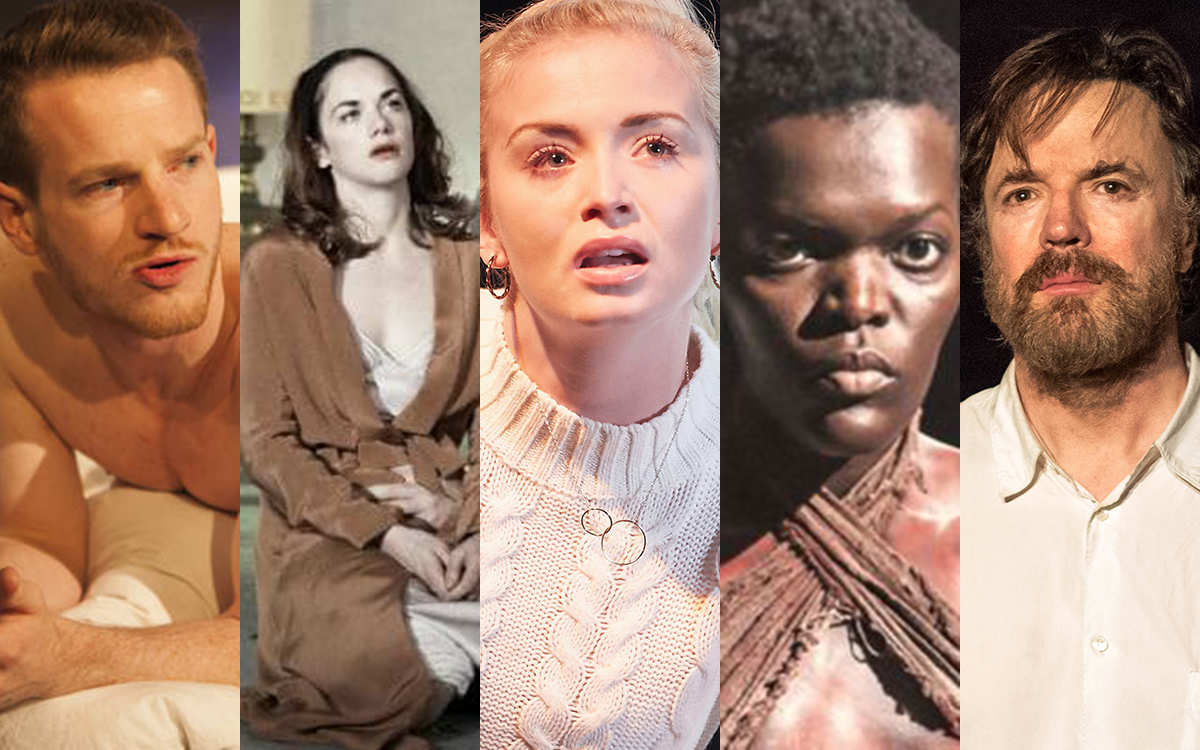 The best of British theatre in 2016, according to me

This year I kept a THEATRE JOURNAL. I wanted to make an effort to see loads more stuff and I’ve been making a record of what I’ve seen; having the comfort of knowing that it’s all been relatively private. As someone prone to Do Theatre myself, there’s something I find quite odd about publicly criticising other people’s work.

So here’s me with the journal. Aw. We’re such good pals. Great times. 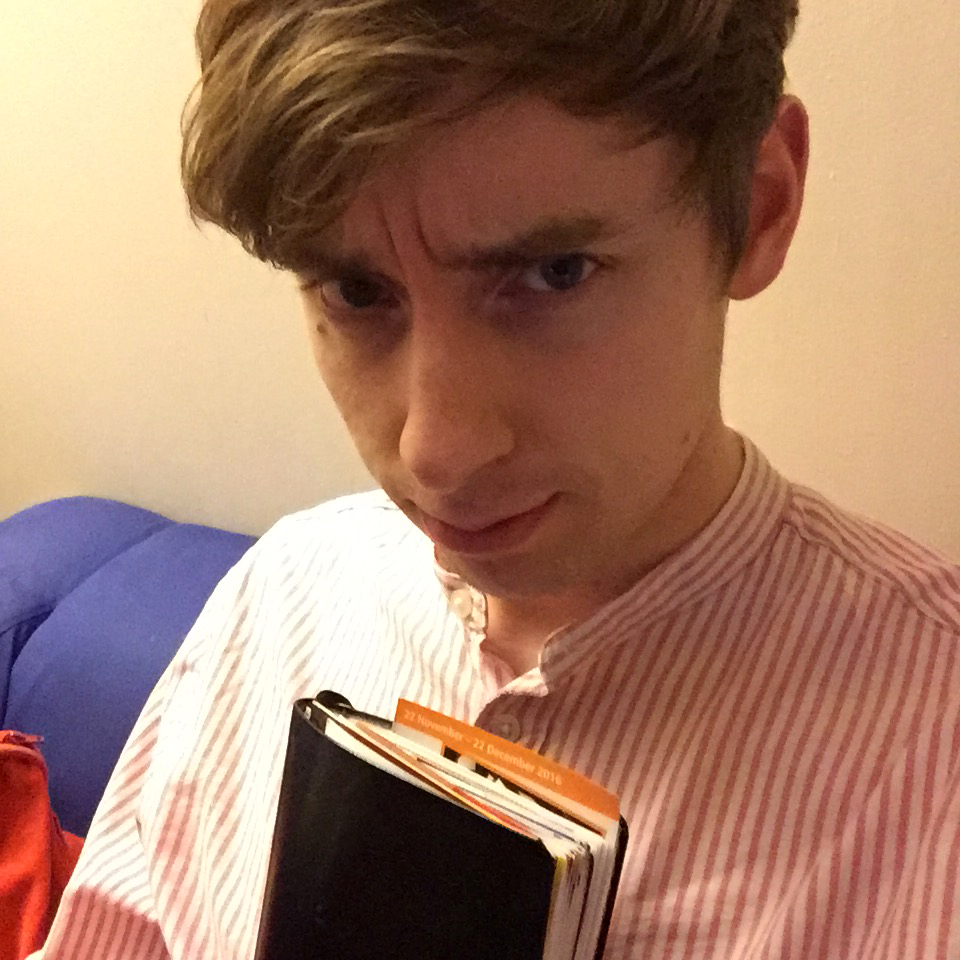 This year I ended up seeing a total of 30 plays, excluding things you should technically class as ‘comedy’ (e.g. Catherine Tate Live) and also any shorts seen at new writing nights. 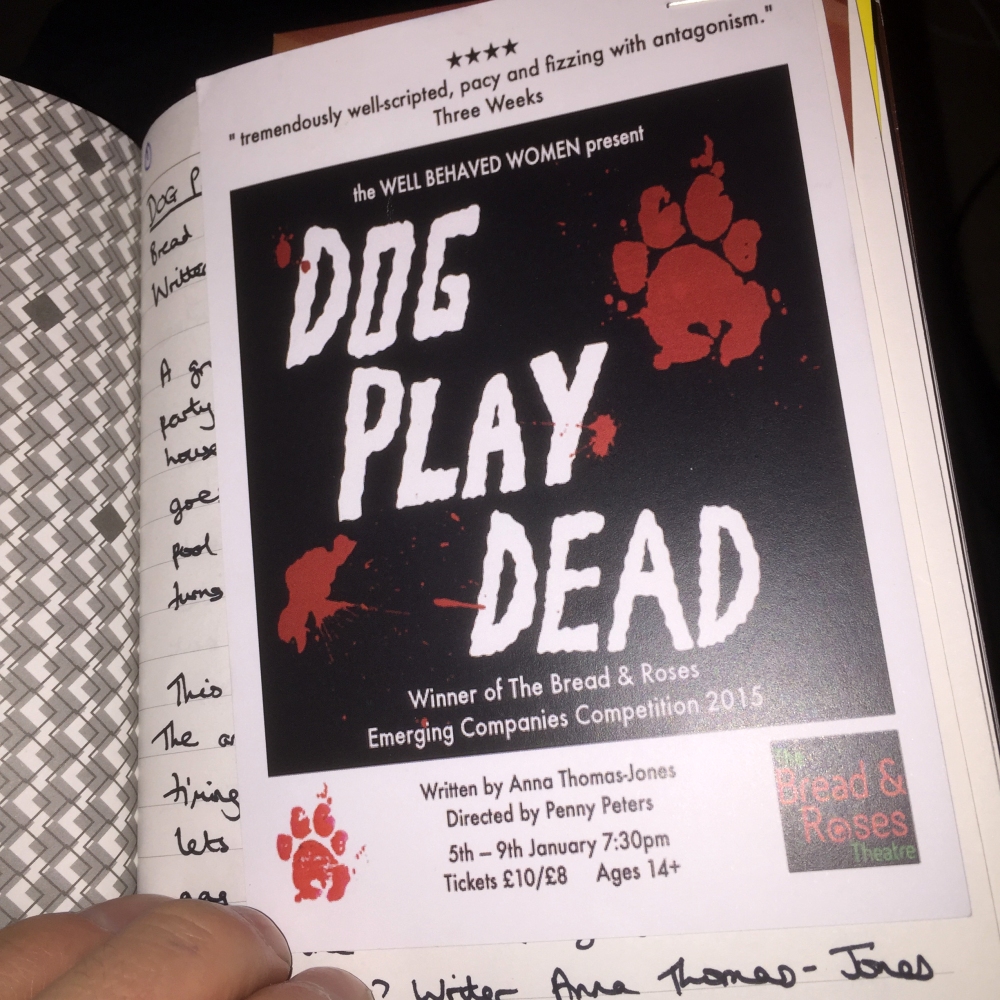 … and ended on Saturday, December 17, at the Hampstead Theatre. 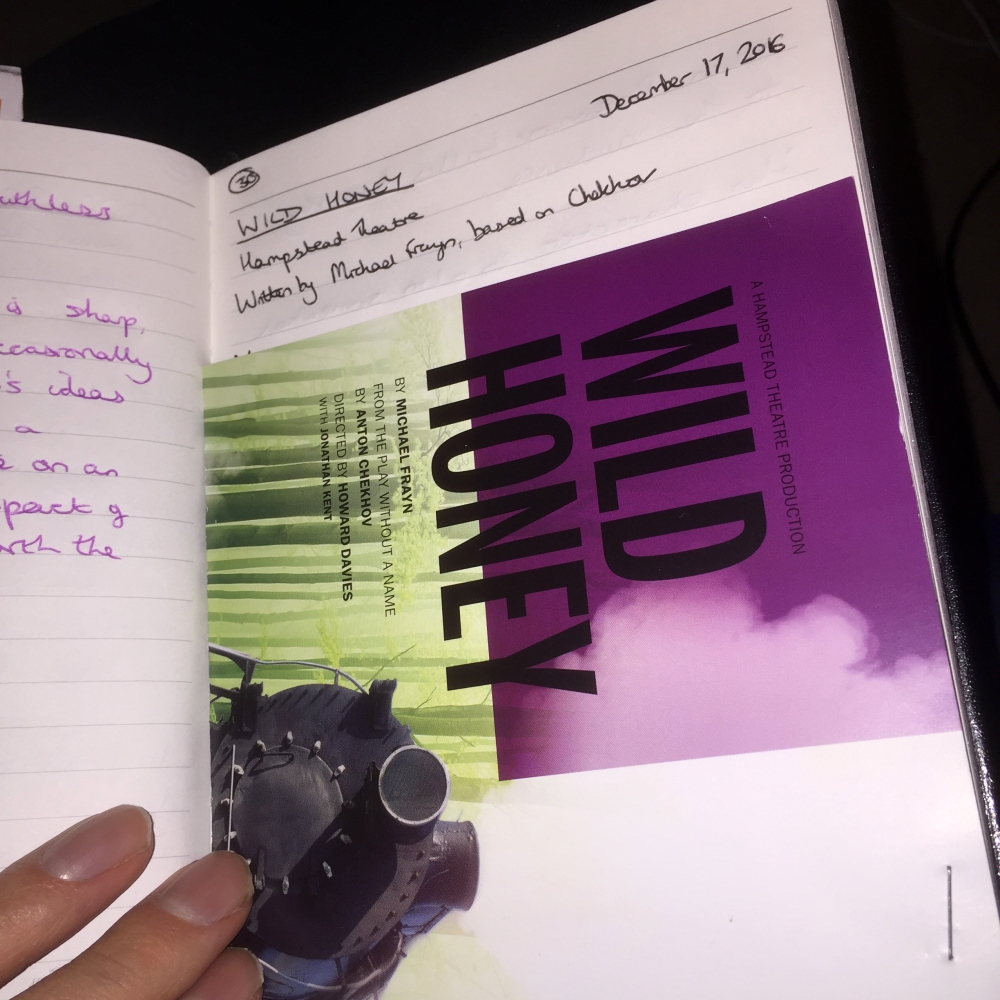 I was so extra, I even gave each play a star rating; although I’ll be damned if any of you buggers are seeing what piece got what mark:

I should say, though, that even though I knew I was being private, I only used 2-star ratings twice, and never used a 1-star rating at all. So it’s been a good year of Seeing Stuff. Well done everyone.

Anyway I’ve had a look back through the whole thing and want to laud (yes LAUD) my faves with some very deserving praise. 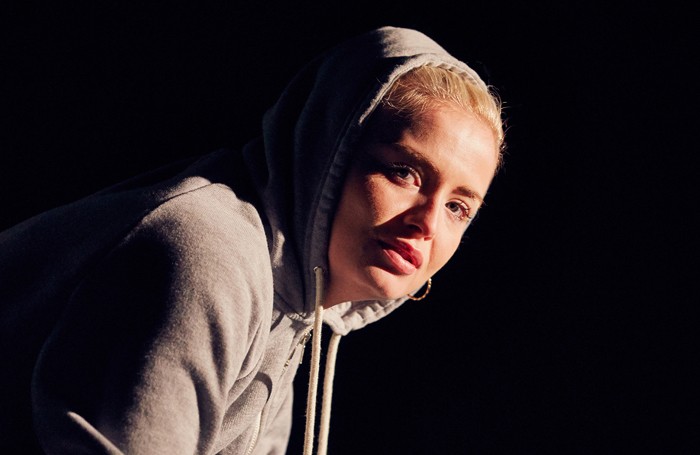 I’m SO fussy with one-person-shows. I struggle with my attention span at the best of times, so when it’s all eyes on one person for over an hour, it’s a hard sell. But this play, and this woman, were amazing. Melville was breathtaking: hilarious, engaging and – when the time came – heartbreaking. These are all pretty tired platitudes, I know, but what I’m trying to say is she really did kick your emotions (AND YOUR BRAIN) hard in the bollocks. 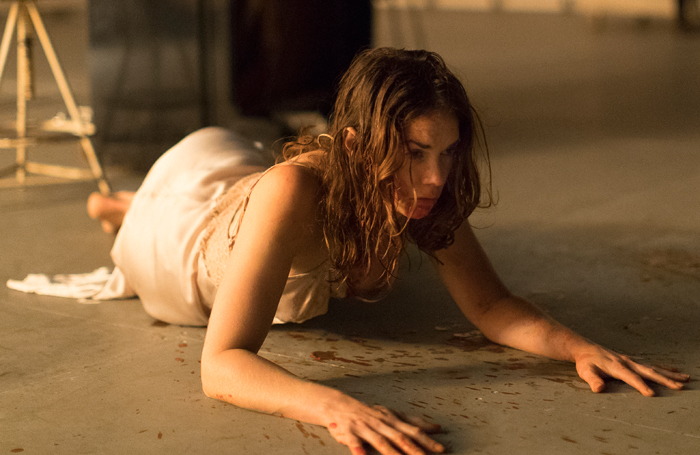 I wasn’t sold on telly’s The Affair, but I stuck with it long enough to appreciate that Ruth Wilson is very good at her job. Hedda changed my mind: she’s not very good, she’s a fucking marvel. I wasn’t totally sure about the whole production of this old Ibsen classic (*A-level shudders*) but Wilson did, without one slither of a doubt, smash it out of the park – and you should absolutely try to see it if you can get your hands on a ticket. When I left the theatre I felt like I’d been electrocuted. (Not literally electrocuted – I’d be dead – but you get what I mean). 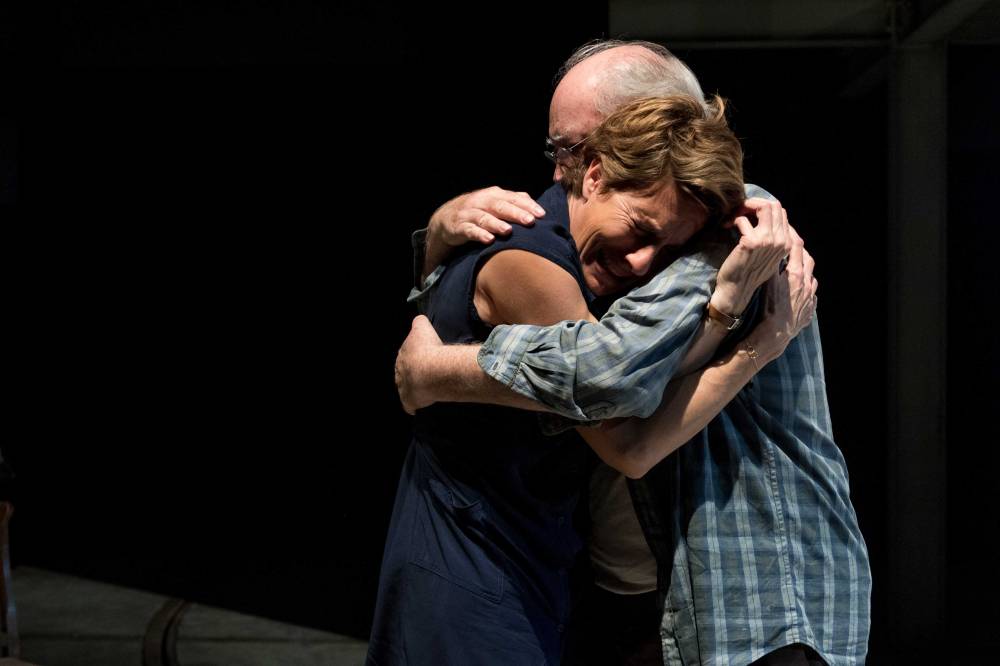 This was the first time I’d ever seen Greig on-stage and she was absolutely brilliant. She wasn’t in a big, show-y part like Melville or Wilson but she just… smashed it, y’know? Her character wasn’t always likeable and she wasn’t even on-stage that much, but the performance was completely real and now I want to see her in basically everything she does for the rest of time. 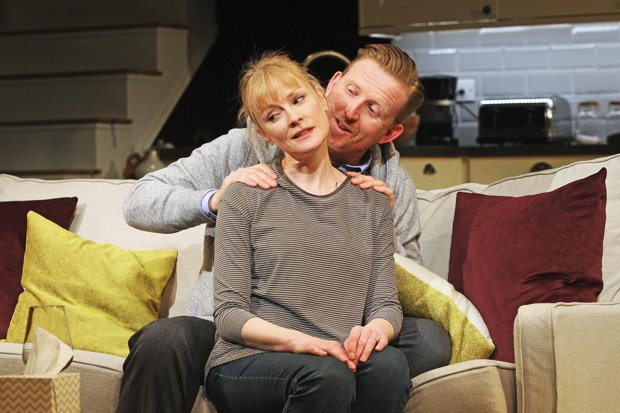 When I say ‘this was right up my street’, I mean it was practically parked outside my house. A family drama coated in humour but with a very delicate undercurrent, it examined one couple and their nearest’n’dearest as they attempted to recover from the death of their young son. Claire Skinner and Tom Goodman led a pitch-perfect cast, and while many reviewers thought writer David Lindsay-Abaire didn’t go ~deep enough into the subject matter, I thought it was wonderfully done. It just all felt truthful; and when it feels truthful, the heartbreak is all the more unbearable.

This Much (or an Act of Violence Towards the Institution of Marriage) (Soho Theatre, seen June 30) 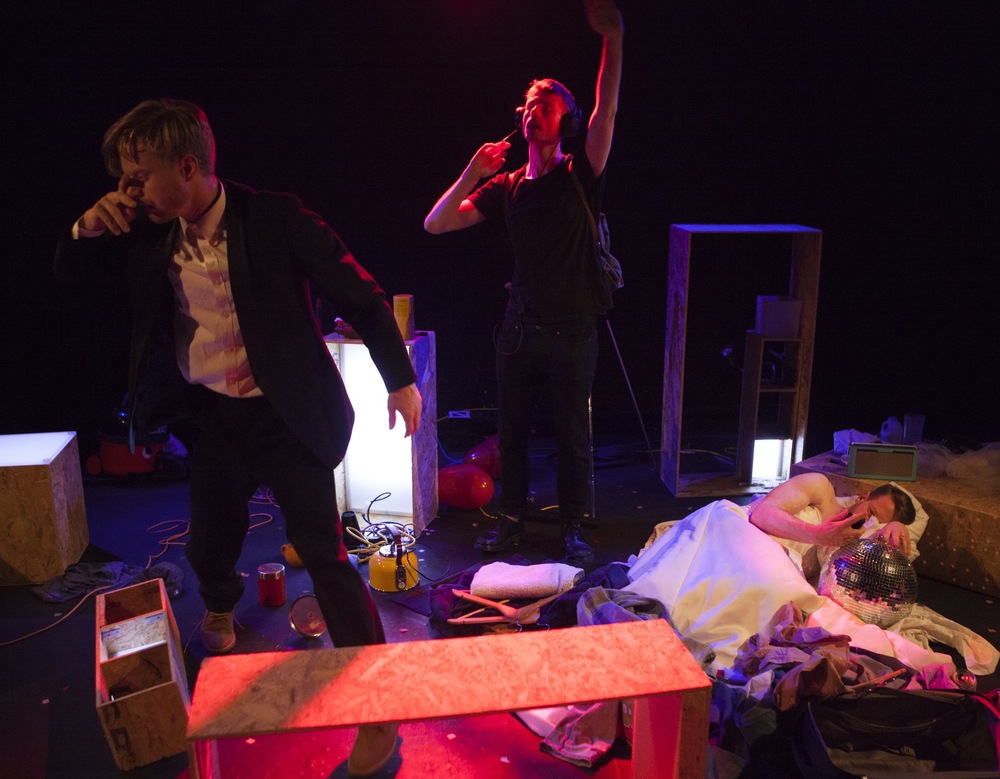 I’m always here for a well-done same-sex relationship drama, and This Much pulled it off brilliantly. With three characters, one relationship muddle and some very wry observations, John Fitzpatrick’s neat play was executed superbly by its cast and creatives but the magic was all in the text, and I found it so relatable it was almost uncomfortable. 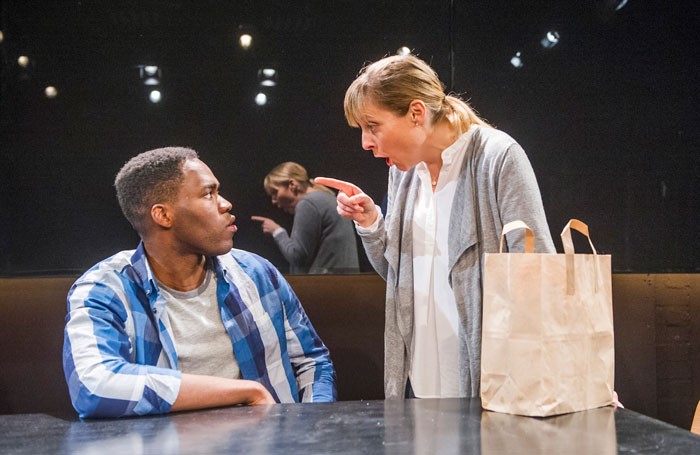 I’ll be honest; I booked tickets for this because it was Mel Giedroyc off Bake Off doing some Serious Acting and I was intrigued. Star casting works, folks! And whilst Mel was impressive (and good on her for cutting her teeth in something so low-key), it was the play itself that really shone. Luce told the story of an adopted, extremely smart kid accused of getting up to all sorts of dark shit, and – as his parents defended him vigorously – the play very cleverly toyed with the ambiguity of his guilt. 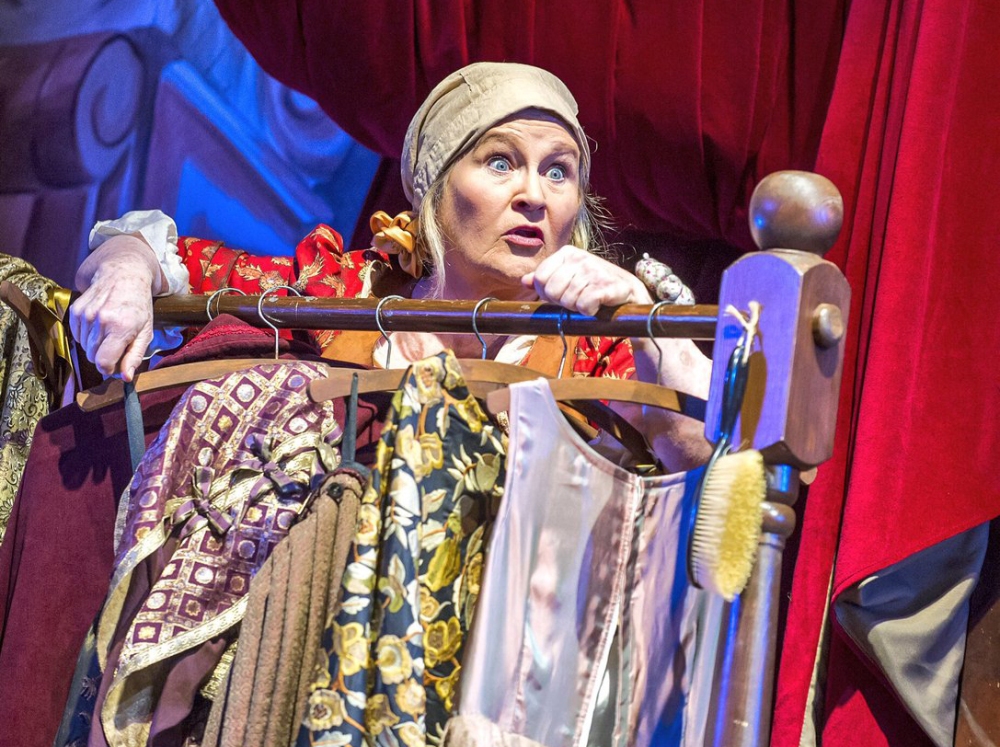 I think she got an Olivier nomination for this…? RIGHTLY SO. She was hilarious, especially when doing bad-acting acting. 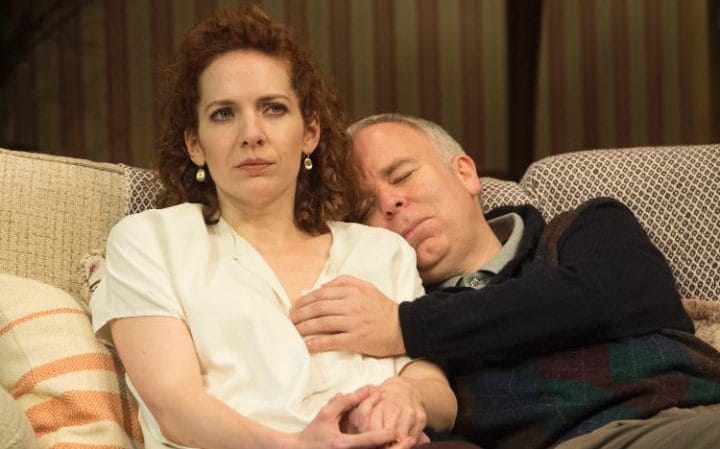 This play was quite problematic in several places (the AIDS joke – and the audience’s rapturous laughter at it – was a real low point) but as a closeted, enthusiastic homosexual, Pemberton was missed whenever he was off-stage.

Nicholas Le Prevost in How The Other Half Loves (Theatre Royal Haymarket, seen March 29) 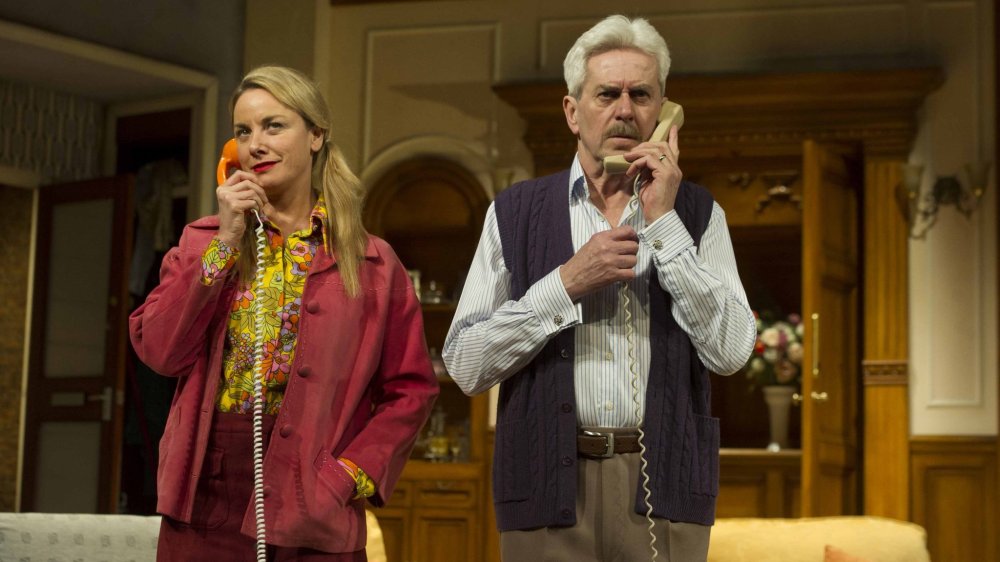 This classic Ayckbourn farce was masterfully performed by the whole cast but Le Prevost – who had the lion’s share of the one-liners – was side-splitting. 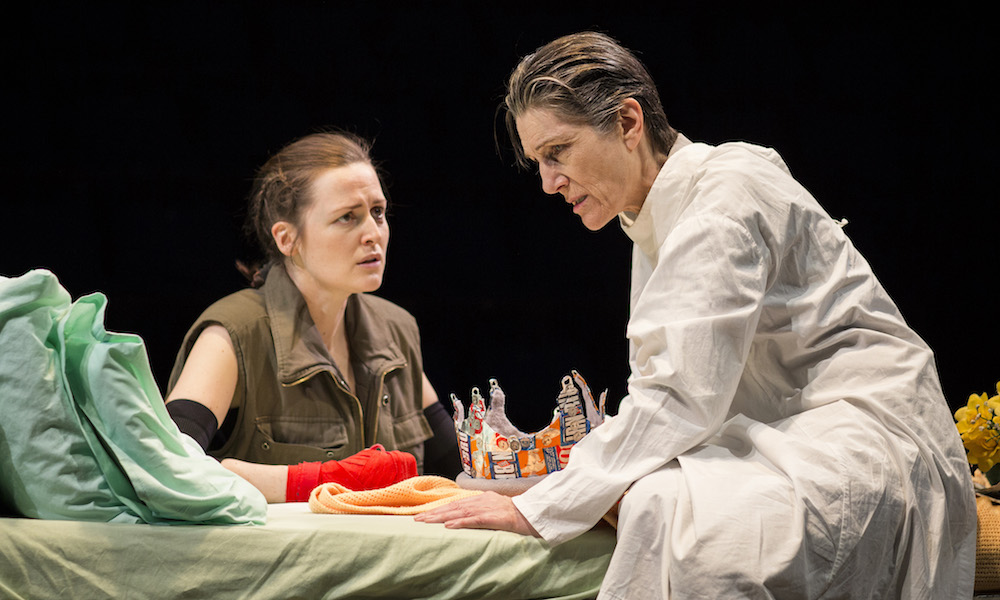 I wish I’d been able to see the whole trilogy, but Henry IV magnificently held its own and was one of my favourite productions of the whole year. The cast was universally O-U-T-S-T-A-N-D-I-N-G and the retelling – set in a women’s prison, in which the inmates were staging Shakespeare’s play – was so well executed. I loved it, and I normally find ‘serious’ Shakespeares a right turn-off. 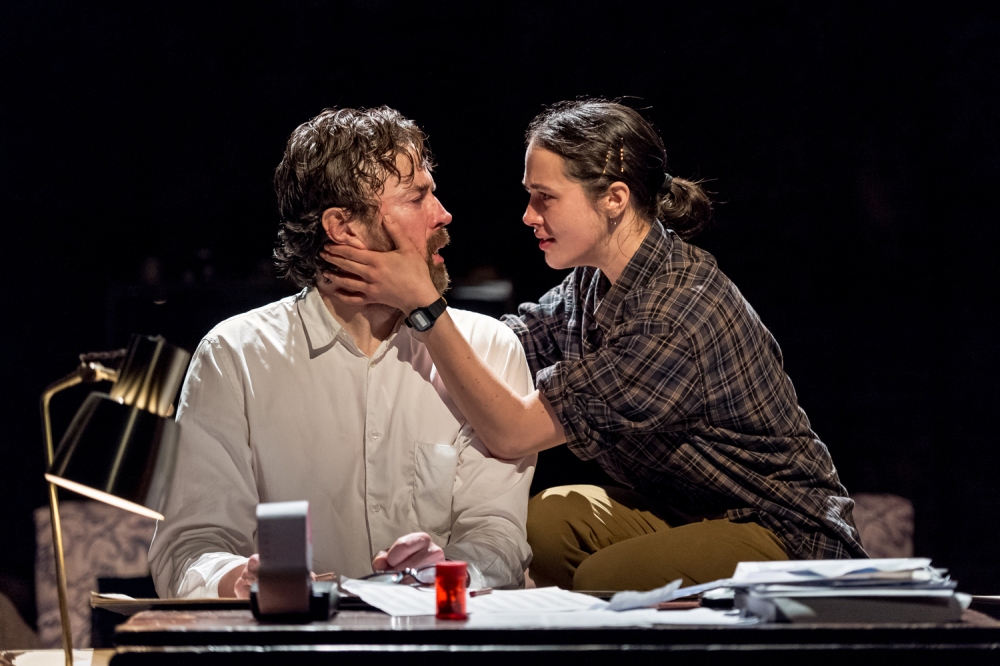 Robert Icke bossed Oresteia last year, and in 2016 his spin on Chekhov’s tale of people struggling to Get On With It also hit the mark – although in a very different way. Jessica Brown Findlay did an amiable job playing against type and Vanessa Kirby was a fab Elena, but Paul Rhys’s John was perfection. This was quiet, engrossing brilliance. 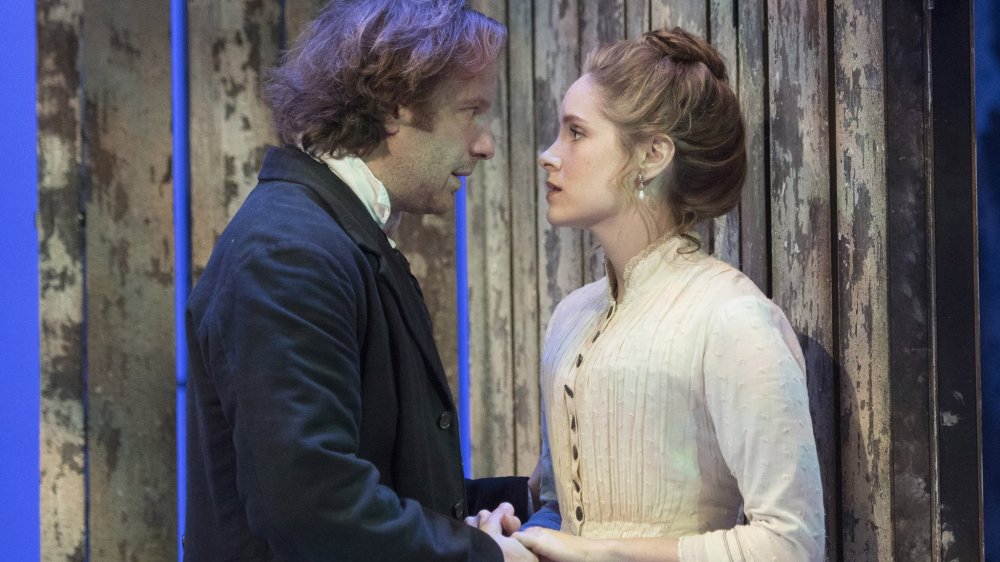 Michael Frayn’s take on the early untitled Chekhov play is a little uneven, granted, but  relentlessly entertaining from beginning to end. The cast is all great, especially Justine Mitchell in a key supporting role, and though stylistically it might be a bit all over the place, it’s great fun.

FUCK ME, WHAT A SPECTACLE 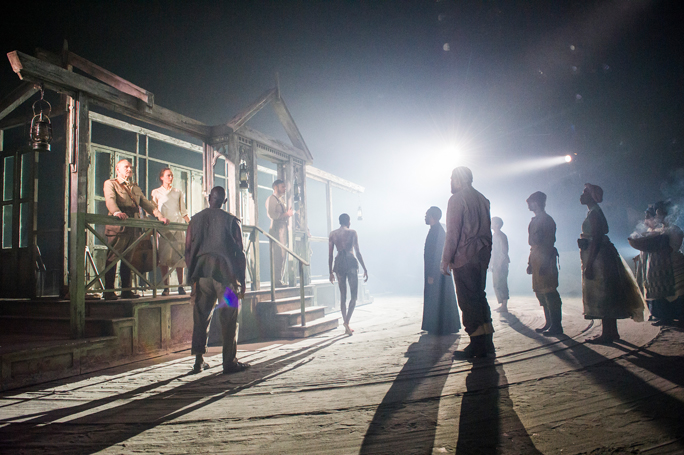 There was so much to love about this play but on a visual level it totally obliterated everything else I’d seen for a long time – or since. The design, the sound, the lighting, the exciting use of such a vast space… super bloody duper. 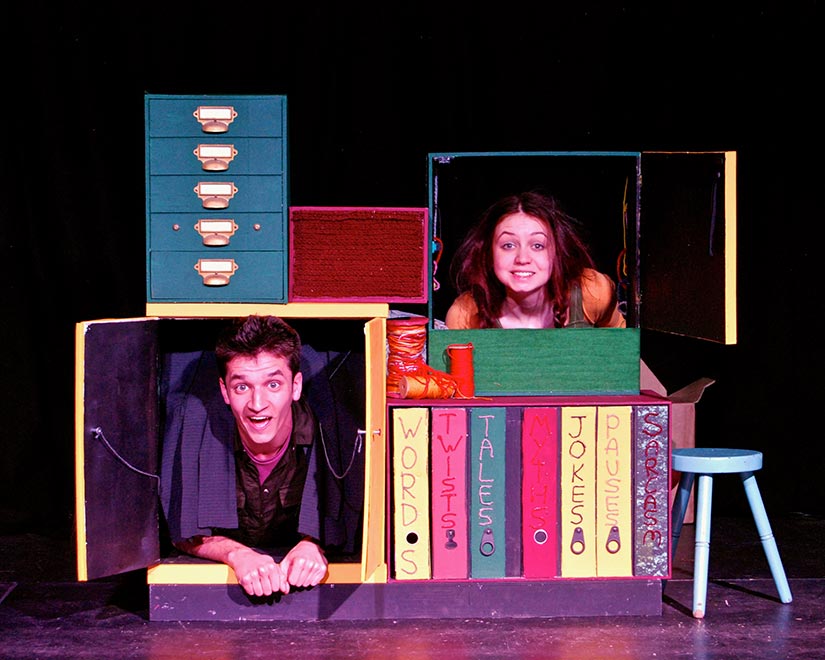 Well, truth be told, this was the only kids’ show I saw in 2016, but it was so lovely I wanted to give it a shout-out. It’s got a couple more dates lined-up for 2017, and I’d encourage a visit – it’s made for the kids, but with a big heart at the centre of it (girl loses her words, adventure ensues), it’s endearing for all. 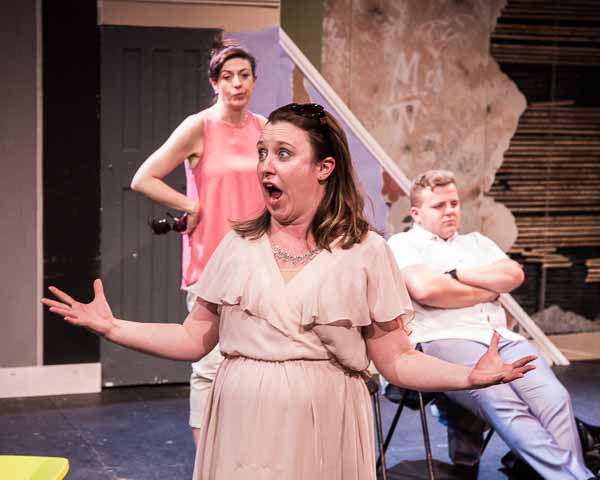 The first 10 minutes of this were a bit touch-and-go as the actors found their feet, but they – and indeed the rest of the cast – did a grand job once they found their footing, and director Rob Ellis (hi Rob) did Bruce Norris’s script great justice. At its centre was a subject matter that can be awfully on-the-nose, but here it was very admirably handled.

OH SOD IT, THAT WAS FUN 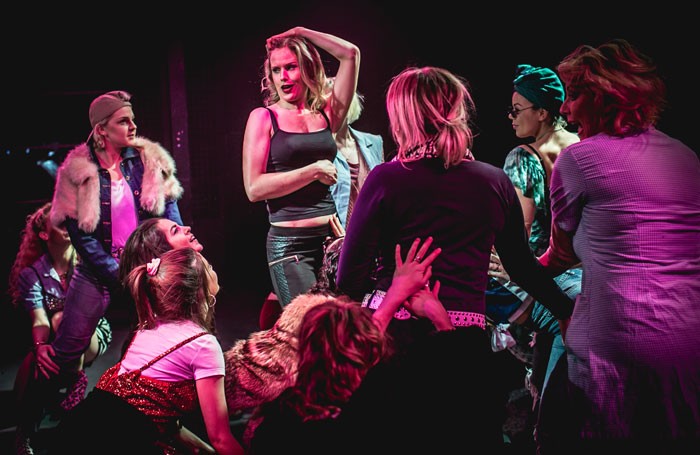 Obliterate Bad Girls as a musical and I’ll be like “yeah alright, fair play”, but it’s just such a fucking ball. And when it’s performed by a great cast, who take it seriously but still have fun with it, it’s a really enjoyable way to spend a couple of hours. This was a total blast, and the “un-glamorous” Union Theatre suited it perfectly.

There were loads more great shows this year too, but I’ll be here for days if I go into them all. Long story short, there was some TOP DRAWER STUFF this year.