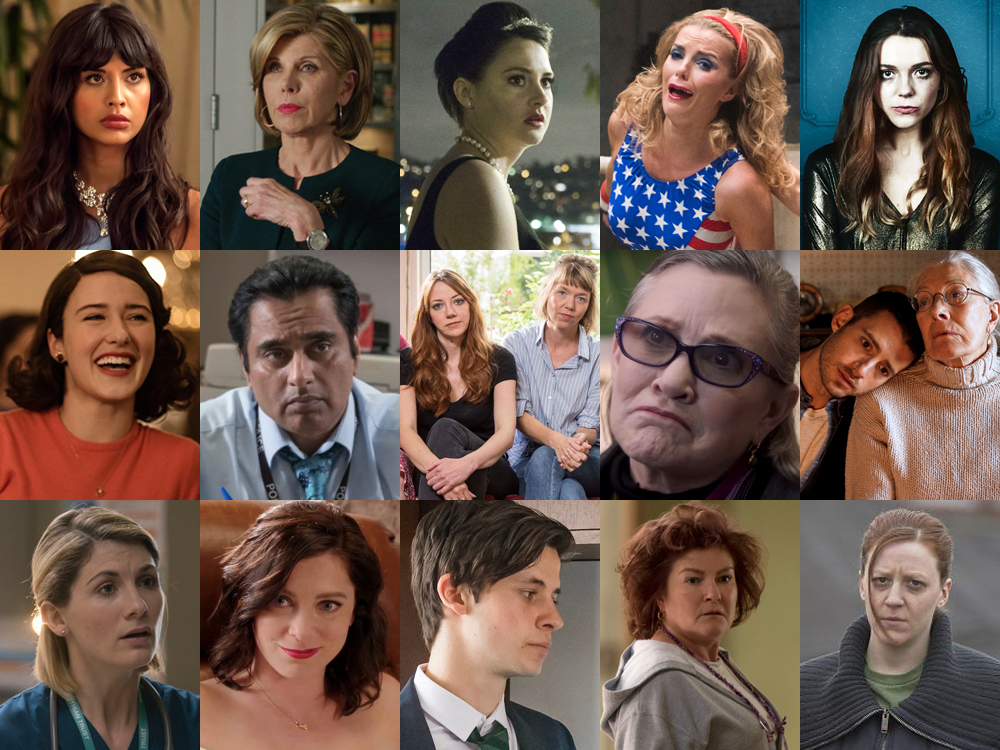 Right it’s nearly the end of LISTMAS for another year, but I wanna put in a quick shout-out to my favourite TV shows of 2017 before we limp over the finish line into another sodding January.

Unlike last year, I’ve kept it purely to scripted shows – mainly because I didn’t actually see much unscripted stuff in 2017 aside from, like, Strictly and Drag Race and GBBO. Obviously I have one particular favourite that I’ve left out due to, y’know, conflict of interest and all that, but there’s plenty of other good stuff to choose from. I’ve also left out stuff my friends were in, such as this… I mean I can’t help it if my friends are super talented but whatever.

You can see my favourite films of the year here, albums here, and singles here.

Cold Feet scored big when it returned in 2016, and the seventh series proved that there’s plenty more stories to tell once the nostalgia wears off. The telling of the Marsdens’ daughter’s abortion was especially moving.

Sheridan Smith does brilliantly in this retelling of the Shannon Matthews case, but Gemma Whelan – playing the girl’s mother Karen – is almost disturbingly good, and I hope to see loads more from her in the near future. The debate about whether or not this story needed to be told, while Shannon herself is still only a teenager, is a very valid and complicated one (worth pointing out that The Moorside never shows any of the kidnapping, and I can’t remember Shannon ever being an on-screen ‘character’ at all) – but judged solely as a television drama, I found it really thought-provoking.

This show got fucking BARMY by the end – gloriously so – but it had me hooked all the way through. Jodie Whittaker is unsurprisingly stellar as the flawed (I mean Christ she is F-L-A-W-E-D) central character, and the premise is so good, if more than a little unsettling.

I tried to watch Glow when it first came out but I couldn’t stick with it. Then after all the word-of-mouth, and with the prospect of a hideously long plane ride looming over me, I gave it another shot – and I flew through it. Persevere, and Glow rewards you with a warm ensemble cast (Kate Nash!!) playing  a set of characters you end up really, really rooting for.

Easy to overlook Unforgotten in an end-of-year scenario, given that it aired right at the start of January, but it was unmissable. IT CERTAINLY WASN’T… UNFORGOTTEN… BY ME!! Better than the first series, if you ask me, and I’m very happy that another series is on its way.

Catastrophe is still brilliant: straddling comedy and real human drama with enviable ease. And that season three had an appearance from Carrie Fisher, filmed just before her devastating death, made it all the more unmissable. I think I read that a fourth season is in the works, and I hope that’s true: Rob Delaney and Sharon Horgan are still one of the best on-screen couples on the box.

I still have SO MUCH more of The Good Place to see, but I’ve loved what I’ve seen so far. Greatest ever Chart Show host Jameela Jamil is a fabulous comedy actress, how about that?!?!

08. Orange Is The New Black (Netflix)

Okay WHY has this incredible season been omitted from virtually every year-end list I have seen? I will concede that it could have been a few episodes shorter, with the first half of the season in particular dragging its feet just a tad. But hit the halfway mark and season five GOES OFF. Episode 9, in which Piscatella stalks the prison and plucks off inmates one by one, plays out like a horror movie; and that final cliffhanger at the end of Episode 13 drew gasps. GASPS. Whatever next?

Christine Baranski reprises The Good Wife’s best supporting character, but this time SHE IS IN FACT THE CENTRAL CHARACTER. The Good Fight is less inhibited than its predecessor, and oooooh it’s a cracker. The support cast is great, too: it’s SO great to have Cush Jumbo back, and Sarah Steele’s Marissa is still just so much fun to watch.

Rooted in a true story, Man In An Orange Shirt is constantly underlined by the idea that This Isn’t Going To End Very Happily, and the result is heart-wrenching. It’s two stories told across two episodes: a guy in wartime Britain, and his grandson in the present day; both gay, both facing different kinds of struggles. Not a comfortable watch, but two great stories, carefully told.

Although PAUSE! While I’m here – and this isn’t in any way a criticism of Man In An Orange Shirt, just a commissioning fantasy – I would still love to see some mainstream telly anchored by gay characters wherein their romance is allowed to be… not without-conflict, as that would be narratively pointless… but a bit more fun. Happy, light, uplifting. Generally not doomed to fail. The stories that are being told are all important and worthy and generally fantastic, but is there room to explore more light-hearted territory as well? I think so. And more non-masc casting would be great, too.

It really annoys me when people compare Big Little Lies to Desperate Housewives or allude to it as some kind of “trashy” melodrama: I LOVE both of those things, don’t get me wrong, but Big Little Lies is only getting those comparisons because its principle cast is all female and all disgracefully rich. In reality it’s a really, really great, meaty drama – beautifully shot, and played to perfection by its ludicrously star-studded cast. Reese Witherspoon was hyped-up to be the show-stealer but, if anyone walks away with it (though it seems wrong to pick), it’s Nicole Kidman; giving among her best performances ever as the abused Celeste. Shailene Woodley, Zoe Kravitz and 2017’s Queen of the Gays Laura Dern also shine, along with a suitably detestable Alexander Skarsgård. There are a few big mysteries to be solved by the end of the final episode, and while I gather that one of them might be quite easy to figure out (though full disclosure: I didn’t), the payoff is SO good.

I checked this out based purely on word-of-mouth and it’s a real gem: in 1950s New York, Midge Maisel (Rachel Brosnahan) dedicates her life to helping her husband launch his stand-up comedy career, and when he leaves her she discovers that she herself has quite the talent for it. I’m a few episodes from the end of the first season so NO SPOILERS PLEASE but the quick-witted dialogue (and when I say ‘quick’ I mean machine-gun-speed) is electric, and the newly Golden Globe nominated Bronahan is delightful. The show is almost stolen, though, by Alex Borstein: most of you may know her as the voice of Family Guy’s Lois Griffin but I recognised her instantly as the ICONIC Miss Ungermeyer in the Lizzie McGuire Movie.

The best teen drama since Skins, Clique got PRETTY FUCKIN DARK as it went along, but the twists OH THE TWISTS were epic. Two mates go to uni, one of them gets real popular real fast, and the pair of them kinda tumble into a gruesome underworld of death and lies and moral clusterfuckery. Great writing, great performances, brilliantly shot, and riveting right up until the end.

The pilot of Motherland – broadcast last year as part of  a big comedy season thing from BBC Two – was, I swear to God, one of the funniest things I’ve ever seen in my life; genuine beginning-to-end, minute-to-minute hilarity. That a full season was commissioned was just damn good sense, and it didn’t disappoint. Anna Maxwell Martin is perfection as constantly embattled single parent Julia, Lucy Punch is deliciously cold as Amanda, PHILOMENA CUNK HERSELF Diane Morgan provides a generous share of the laughs as Liz, and Philippa Dunne’s Anne has rightly become the cult-like breakout fan favourite. They’re all jewels in the crown but it’s the script that is the actual crown itself (that metaphor doesn’t work does it) and it’s juuuuuust absolute genius. 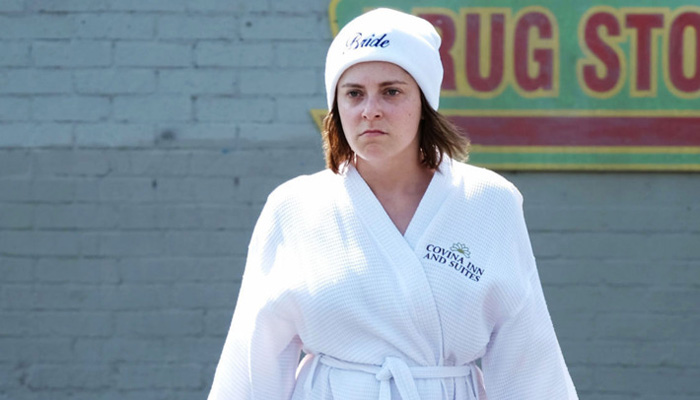 The first half of Crazy Ex’s second season – aired at the back end of 2016 – was worrying. It showed a brilliant comedy painting itself into a corner and struggling to maintain its momentum after a brilliant first year. But as the season continued in January, the dismissal of one character and the decision to make Valencia (one of Rebecca Bunch’s previous enemies) a new ally went a long way towards helping a wonderful rejuvenation, and by the end of the season, it was on better form than ever. Season three, which is currently a few episodes deep at time of writing, is continuing the incredible streak; now putting much more focus on Rebecca’s mental health. Where it’ll go from here remains uncertain, and it’s very possible that Crazy Ex will find itself snookered again before long. But right now, in this moment, it’s still the best show on TV: funny, vibrant, and – when it wants to be – really fucking hard-hitting. And the songs still bang.